There are a number of important lessons learned from the fight against Keystone XL.  Perhaps most importantly, that the climate movements picked a fight scoffed at by lobbyists, politicians and pundits, dug in, fought hard and won (at least partially). The broad coalition of Indigenous groups, Nebraska and Texas landowners, students, environmentalists and many more challenged the huge amounts of political and social capital that Big Oil has in our society and fought back.

In August 2011, the Tar Sands Action launched the first major escalation against the Keystone XL pipeline. Responding to a call to action put out by environmental writer Bill McKibben, over 1200 people engaged in two weeks of rolling sit-ins at the White House. The Tar Sands Action helped launch a political movement on climate in North America and turned Keystone Xl into a household name. 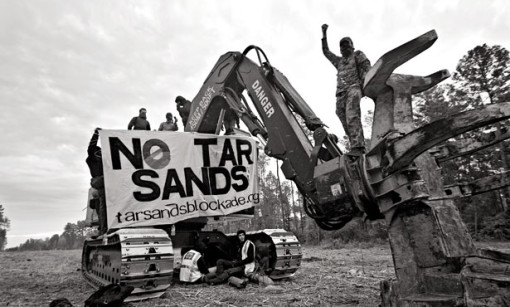 In the summer of 2012, an unusual grassroots coalition of conservative landowners and radical environmentalists, calling itself the “Tar Sands Blockade,” launched the second major escalation against Keystone XL. Their goal was to stop the construction of the southern leg of the Keystone XL pipeline which had been approved by President Obama earlier that year.

The Tar Sands Blockade saw dozens arrested, brutalized by police and sued by Canadian oil giant TransCanada in efforts to stop the ongoing disruption of work along the pipeline route. In the end, the southern leg of Keystone XL was built and today, 400,000 of barrels of oil flow from Cushing, OK to the Gulf Coast every day.  But without the strong courageous people-powered resistance of the Tar Sands Blockade, the rejection of the northern leg would have been out of reach. 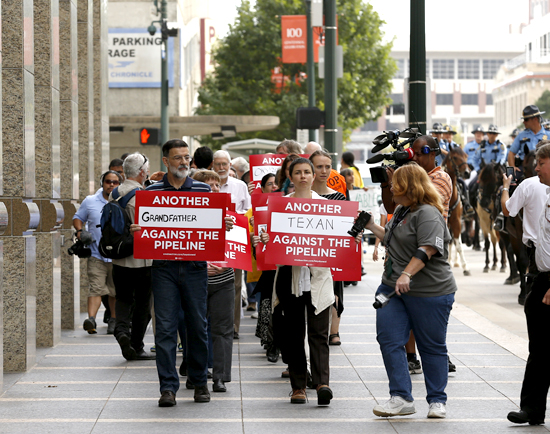 In the spring of 2013, Rainforest Action Network joined with CREDO Action and the Other 98% to launch another major escalation in the fight: the Keystone XL Pledge of Resistance. We had a clear goal of intervening in President Obama’s decision to approval of the pipeline with a network of climate activists built out of his liberal-progressive base. Like the Tar Sands Action in 2011, we took Keystone XL and wedged it in between him and one of his primary bases of support.

Critical pieces of the Pledge:

Around the continent, tapping into the “currency of moods” through days of action, disruptions at events featuring American and Canadian politicians, even more disruptions at events featuring corporate executives,  constant digital and media communications, vigils, protests, civil disobediences and the massive Pledge of Resistance changed the story from Big Oil’s inevitability to “when we fight, we win.”

All of this showed the moral urgency for the anti-Keystone cause.

For now, the Keystone XL campaign has taken Democratic presidential candidate Hillary Clinton from “inclined to approve” to “I oppose it.” Oil companies have been put on the defensive and dozens of other campaigns against oil and gas projects have been emboldened across the continent. And finally, it led to a rejection of TransCanada’s permit for the northern leg by Barack Obama.

More importantly, the fight against Keystone XL triggered a climate movement motivated to disrupt and stop the fossil fuel industry wherever possible. There is a diaspora of pipeline fighters who sat-in at the White House, occupied the piney woods of east Texas and signed the Pledge of Resistance fully engaged in resistance to dirty destructive fossil fuel projects.

In the past year, we’ve seen:

A clear pivot from Keystone XL has become the rallying cry of “Keep It in the Ground” with everyone from President Obama to Wall Street banks co-opting the slogan in the aftermath of the Paris climate agreement. While the creation of an actual agreement with a goal of emissions reductions to 1.5 degrees is progress, corporations and craven politicians will do everything in their power to undermine it.

We organized and pressured Obama over Keystone XL and changed the story from Big Oil’s inevitability to “rejection.” Now, we need to continue to change that story and say “keep all fossil fuels in the ground.”

Scott Parkin is a Senior Campaigner with Rainforest Action Network and organizes with Rising Tide North America. He has worked on a variety of campaigns around climate change, the wars in Iraq and Afghanistan, mountaintop removal, labor issues and anti-corporate globalization. Originally from Texas, he now lives in San Francisco.
View all posts by Sparki →
This entry was posted in Uncategorized and tagged direct action, keystone xl, resistance, tar sands. Bookmark the permalink.